The place to be this week is with Pat McCrossan at Dick Turpin's Pub in the Royal York Hotel.

He not only plays great rock n' roll, but also plays beautiful music on the Mandolin.

Start with a generous measure of top 40 hits, add a dash of Blues, throw in some Country, maybe a dollop of Bluegrass and a dash of Latin Jazz. You just never know what Pat will serve up, but its all great. 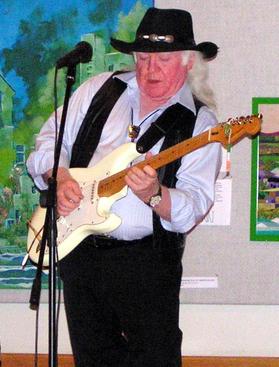 A country Jamboree with Seisiun8 musicians

This Smiling Irishman who has mastered the guitar, Banjo, Mandolin, Fiddle and more, will surely get your feet tapping, and your heart singing.

I watched and listened to Pat's show for almost two hours, and the mix of musical styles that he covered blew me away. How can someone go from 'Danny Boy' to Pink Floyd's 'The Wall. And from 'Beverly Hillbilly's to 'Dr. Zivagho theme' with such ease.

​A Canadian musician and entertainer for more than 50 years. Born in Ireland, Pat came to Canada in 1969 to join a Canadian Country and Rock band. He was one of the top-rated rock guitarists in Ireland in the 1960's. Besides playing with the band he was in demand for session work at ARC studios in Toronto with many top Canadian country, folk and Pop musicians. He also taught classical piano & guitar with 'The Royal Conservatory of Music. He has recorded many albums with various themes from Country, Blues, Rock n' Roll, Easy listening, and acoustic Folk. Even in his later years, he has not slowed down one iota, and is still in demand for concerts, dances and wakes & riots.

A talented man who can switch from the top 40 to Country or Blues to Comedy. A show for all tastes.

Inspired by early Blues, Country and Jazz musicians like Skip James, Hank Williams, Wes Montgomery. He is a huge fan of the older great guitarists like Chet Atkins, Les Paul, Joe Maphis and Doc Watson, and the players in the 60's - 80's like Jimmie Hendrix, Mark Knopfler, Pat Travers and Stevie Ray Vaughan. A big fan of the Southern Gospel music of JD Sumner, Statler Brothers and of course Elvis.